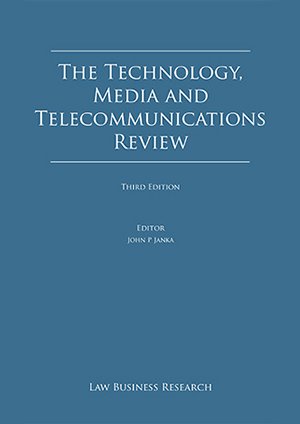 The Technology, Media and Telecommunications Review

The digital revolution continues to alter both local culture and the world in ways that few could have imagined when the seeds of the Internet were sown more than 40 years ago. The Internet allows ideas, news and other information to flow more freely than ever before, making it increasingly difficult for nations to control this flow at their geographical borders. Moreover, the Internet is forcing changes in many long-standing business models. It now serves for many as the preferred means of communication and media delivery, displacing or supplementing other means, such as traditional copper phone service, print media, subscription TV services and broadcast networks, in the process. The Internet now also serves as a new marketplace for goods and services, as well as a primary research tool for many.

New technologies place into our hands more computing power than was used by astronauts when the Internet was in its infancy. The proliferation of these mobile devices – smartphones and tablet computers – leads many to employ texting, e-mail and blogging instead of communicating by the spoken word. We expect to have constant access to the networks that we use in this manner to stay in contact with our social circles and the rest of the world. And our most intimate thoughts are often now memorialised for the long term, in ways that can be potentially used by third parties for purposes we have not truly anticipated.

The legal frameworks in many jurisdictions are now straining under these disruptive changes. The old adage that technology outpaces the law is more true today than ever. No doubt, the ‘hands-off’ approach to the Internet that many lawmakers and regulators once took has facilitated many of these developments. At the same time, policymakers are now struggling with new types of concerns, as broadband Internet access service becomes more and more essential to our lives. Is the marketplace responding to the needs of consumers? Are broadband networks being deployed everywhere that they are needed? Are the capabilities of those networks adequate? If not, how should government ensure that none of its citizens is left behind? Is it appropriate for government to invest in broadband infrastructure in a manner similar to its historical investment in roads, bridges, and other critical infrastructure? Is it fair to liken broadband service to a utility, or does the state of competition make that an unfair analogy? Can government provide the best overall solution, or should it just fill in any infrastructure ‘gaps’ not closed by commercial providers? Should government establish ‘ground rules’ upfront, or should it intervene when it perceives that abuses of market power exist? How does government avoid skewing the competitive marketplace by (inadvertently or otherwise) preferring one type of technology over another and thus effectively picking the winners and losers who otherwise might emerge in the marketplace, and challenge the incumbents? Who are the new ‘gatekeepers’ in the Internet broadband distribution chain, and is it enough to focus on regulating the network operators when others further up the chain, such as application service and equipment providers, have more influence than ever before on what information we access and how we access it?

This expectation of instant and continuous mobile connectivity, and the development of bandwidth-intensive ‘apps’, create an increasing demand on the limited radio frequency spectrum asset. While digital technologies allow more efficient use of spectrum than ever before, the laws of physics still render some spectrum bands more valuable than others for mobile communications. The demand for wireless spectrum outstrips the supply in many markets, and regulators are increasingly being forced to ‘refarm’ spectrum bands that were designated for other purposes before the mobile broadband revolution was a glimmer in anyone’s eye.

This third edition of The Technology, Media and Telecommunications Review provides an overview of the evolving legal constructs that govern these types of issues in 29 jurisdictions around the world. Although the authors cannot fully address each of these topics in the following articles, we hope this book provides a helpful framework for starting your analysis.